In this post, guest blogger Jean takes us to the world of M. R. James, famous for his creepy gothic tales, which have inspired several 20th and 21st century authors. Jean is a librarian blogging at Howling Frog Books who loves history, world literature, and anything involving textiles or embroidery. 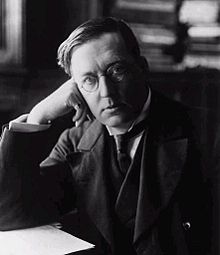 Montague Rhodes James (1862 – 1936) spent his life as a scholar and medievalist, working at Cambridge and Eton, and he also wrote ghost stories on the side, for fun. He knew much of the Gothic tradition, and both drew upon it and departed from it, bringing new ideas to the scene; I think we can fairly call him a bridge from Gothic literature to the beginnings of modern horror. Being an antiquarian (enthusiastic does not begin to describe it), he enjoyed featuring ancient manuscripts, artifacts, or monsters, and his protagonists are often scholarly gentlemen, like himself.

James was the son of a clergyman, and his stories depict a society in which the unassailable centrality of the Anglican church is assumed (rather like Trollope). He also appears to have been a keen antiquarian from childhood. A friend’s reminiscences* include examples of what I would call pretty unusual behavior for a little boy:

[At age 6] …when recovering from a bad attack of bronchitis, he expressed a longing to see a certain seventeenth-century Dutch Bible which he had heard was in the possession of his father’s friend…

[At Eton] …A boy who could, out of the pound given him as his half’s pocket-money, spend on his way back to Eton sixteen shillings for the four volumes of John Albert Fabricius on the Apocrypha was obviously not as other boys. 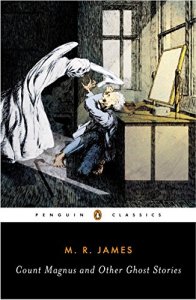 Some of James’ favorite literary techniques came from Gothic literature. He often used the ‘found manuscript’ conceit, and even doubled it a time or two. Or, James would sometimes change things up and make the found object a picture, a piece of stained glass, or something else with a secret message to disclose. Ancient churches or ruins were, of course, favored settings; the older and more mysterious, the better.

On the other hand, James departed from Gothic tradition by setting his stories in his own time, and usually in England instead of the wild unknowns of Italy; when they are set in a foreign land, it’s probably in ‘civilized,’ Protestant Scandinavia. And while cathedrals and churchmen are thick on the ground, they are, wicked or not, nearly always solidly Anglican. James liked to start with an utterly ordinary setting, and then gradually bring in the creepiness, which heightens the horror and brings it closer. You don’t have to go to Italy and be attacked by banditti in order to experience a Gothic tale; it can happen right at home.

One of my favorite stories is “The Tractate Middoth,” which features an elderly scholar coming into a library and asking for an obscure (but real!) book of Hebrew commentary. The young library assistant, Mr. Garratt, heads off to fetch the book … but it’s haunted by a terrifying specter that doesn’t want to give the book up. Mr. Garratt has to take a vacation in order to recuperate from the shock, and it so happens that he hears some information that might have some bearing on his experience. He learns who the elderly man is, and is in time to see him obtain the book and meet the specter himself.**

Possibly one of the most traditionally Gothic tales is the very well-known “Count Magnus,” in which the narrator tells of a manuscript he has found, revealing the visit of a travel writer to Sweden. Mr. Wraxall stays with a prominent Swedish family, and becomes fascinated with an ancestral mausoleum attached to the church – but it’s locked. It houses the tomb of Count Magnus, a legendarily wicked lord of the manor who was said to have gone “on the Black Pilgrimage, and had brought something or someone back with him.” (Just what the Black Pilgrimage is, is only partly revealed, but it’s implied that the Count made a metaphysical journey to a cursed city and perhaps made some sort of covenant.) Mr. Wraxall eventually gains access to the mausoleum, and finds the tomb locked with three padlocks, which fall off one at a time… 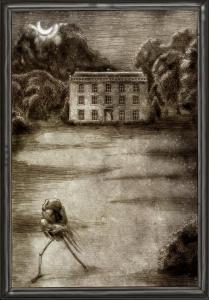 Illustration for “The Mezzotint”, Loneanimator, DeviantArt.com

This is typical of James, to start with a modern setting, jump back 50 and then a couple of hundred years, and bring the ancient horror up to the present. His horrors, however, are not the typical Gothic kind of pale and elegant specters. James’ monsters are often short, hairy, skinny, and/or muffled in fabric. He must have had a horror of spiders, and he’s the only writer I’ve come across who can make white linen or flannel terrifying. His creatures are nearly always chiaroscuro figures of shadow and moonlight, and are described like engravings or woodcuts – antique illustrations in black and white – as in “The Mezzotint”, when a print of an engraving shows a figure “crawling on all fours towards the house, and it was muffled in a strange black garment with a white cross on the back…” and later,

the black drapery hung down over its face so that only hints of that could be seen, and what was visible made the spectators profoundly thankful that they could see no more than a white dome-like forehead and a few straggling hairs…. The legs of the appearance alone could be plainly discerned, and they were horribly thin. 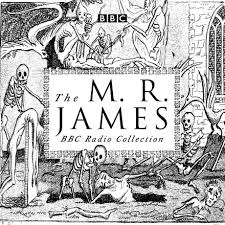 Since I’m a book person myself, I always like James’ constant interest in books. This time, I paid a little more attention to the footnotes and realized that since quite a few of the books he mentions are real, and I live in the glorious age of the internet, I might be able to find some of them and see if they interest me. Most of the ones I looked up were indeed on archive.org, and so I downloaded a book on alchemy and a few volumes of “Bell’s Cathedrals,” and looked at the works of Thomas Bewick (a famous and incredibly prolific engraver who illustrated a variety of works from natural history to Aesop’s Fables). I found PDFs of the Harleian Miscellany, which is a multi-volume collection of old pamphlets and looks kind of fun, but the pages are not very easy to read and the automatic OCR made absolute hash of them when I tried to get epub files. All of this, however, helped to remind me what it was like to learn things back in about 1900. If you wanted to know what Canterbury Cathedral, or Sweden, or what various sorts of owls looked like, you usually had to get a reference book and look at engravings, or at best a few black-and-white photos. No books stuffed with color photos, and certainly no Google Maps to bring you endless views of nearly every famous landmark on Earth. 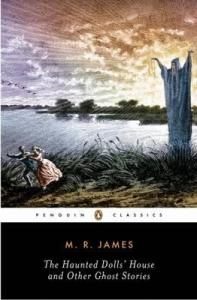 The Haunted Dolls’ House and Other Ghost Stories, Penguin Classics

Other favorite stories of mine are “A Warning to the Curious” and “Mr. Humphreys’ Inheritance,” not to mention many others, but I will let you discover them yourself. James’ stories are most easily found in two Penguin paperbacks: Count Magnus and Other Ghost Stories, and The Haunted Dolls’ House and Other Ghost Stories, which collect all the short stories together. Much of his work is also available for less money and slightly more effort at the Gutenberg Project. There are also quite a few BBC adaptations on YouTube; I’ve watched two so far, and plan to watch more. 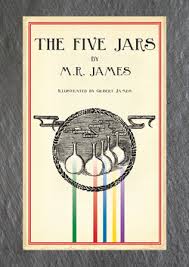 I only recently discovered that James also wrote a charming tale for children, “The Five Jars”, which combines fun and shivers in about equal measure. I downloaded it from Gutenberg. The narrator (James himself) is led to an ancient buried case holding tiny jars of ointment, which allow him to hear, see, and speak with magical creatures of all sorts. He needs their advice, because there are evil forces trying to get the case too.

Once you read James’ spooky tales, you’ll start to see his influence in innumerable later writers of creepy stories. I’m not a reader of Lovecraft, but I know he commented positively on James’ work. I’ve seen James’ plots adapted or even lifted outright for use in children’s and YA fiction (which is where my experience lies). John Bellairs, one of my favorite spooky children’s writers, often used Jamesian details; his successor, Brad Strickland, has been more overt about it. And in The Dollhouse Murders (1983), Betty Ren Wright rewrote “The Haunted Dolls’ House” for 10-year-olds.

I’m not enough of a scholar to really know, but as far as I can tell, M. R. James is considered the inventor of the ‘antiquarian ghost story’ – which I suppose is my favorite type of ghost story! And there’s no need to keep his works for the autumn; he followed the British tradition of having ghost stories at Christmas, and many of his tales were written to share at that time of year. I hope you’ll enjoy them too.

**I found a fairly recent BBC adaptation of “The Tractate Middoth” on YouTube, and thought it was very well done. I am supremely envious of Mr. Garratt’s library! I do have one small quibble, though; this is one of the few James stories with a pretty happy ending, and the BBC felt it necessary to add a little to it, which I didn’t really think was the best choice. But I encourage you to read and watch both, and see what you think.

"The world was hers for the reading."