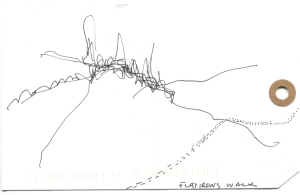 Another promise to myself this year is to write some short fiction, so I’m trying an experiment: one short story per month (most are going up on Wattpad). Let’s see how long I can keep this up.

In 2013, my sister sent me this card (download and enlarge for a better view); it inspired the following.

The snow was deep when Flatiron set out for Invermere. He’d been tempted to stay in, a bowl of hot porridge in his lap as he toasted his feet on the hearth. The wind had picked up overnight, and its claws were searching in every crack for a way into his cottage. He knew that if he went outside his walls, it would tear through his layers of cloak, clothing and undergarments to freeze his skin.

Yet he needed to check his mail. A certain package ought to be waiting for him in the cubby, third from the left and five rows down, behind Mrs. Foresight’s thin lips and fearsome bulk at the corner shop in the village that lay, under banks of snow, just over the Hill. Through the thick window in his front door, he could make out the blurred image of a tree’s massive branches waving at him as he pulled his snowshoes from their rack.

While wrapping his scarf around his neck, Flatiron hummed a summery tune. He recalled how the hottest day of the previous August had scorched his bare head while he’d weeded the snapdragons. As usual, the memory didn’t warm him.

“Cheer-io!” he called out, though anyone else would wonder who he was cheer-io-ing. Flatiron lived alone.

The door banging shut sounded like “good riddance!”
“Yes, I know. You’re tired of me.” Flatiron heard the bolt shoot across on the inside. “At least I’m doing something productive!” he shouted through the thick door before turning up the path to open his gate. He paused a moment. The tree that had waved at him stood still, even in the wind. Its dark branches, silhouetted against the sky, looked like cracks in river ice.

Then, with a creak, the gate swung to behind him, shoving him into the world.
Behind him, a window curtain tweaked, but Flatiron pretended not to notice. “You’ll be lucky if I’m back before supper. It ain’t no picnic, walking to Invermere in all this. A good horse and sleigh would be worth its season’s feed, but no.” His voice rose two octaves. “‘Can’t afford it, too rich for us, we aren’t the aristocracy.’ Pah! Anybody’d think we were chimney sweeps.”

The deep whiteness soaked up his words so that not even the parliament of owls, hunkered down in the copse on his left, heard him. Flakes of snow, in a windy fluster, eddied around him.

He muttered as he shuffled along, his snowshoes leaving a slurred track. “There’s never an ‘enjoy your walk’ or ‘my regards to Mrs. Foresight.’” He leaned into the wind, and his words whipped past his ears, only to get caught in the few remaining strands of hair that trailed from his woolen cap. He tucked them under his collar, where they melted into soft whispers that warmed his neck.

Invermere lay to the southwest, and the sun would have been in his eyes if not for the thin clouds moving in from the sea. The muted light exaggerated the bleak landscape. Bare branches in the copse scratched against the low sky. They stretched towards Flatiron as he shuffled past, and he fought off an urge to swat at them. The sky seemed to sink lower and lower, as if to enfold him in a damp blanket.

Off to his right, Bearded Tor sheared steeply upward. Sharp pinnacles cleaved the sky, shredding the clouds that hung about the peaks. “Like me, old man, you’re losing your hair,” Flatiron commented.

A herd of black-nosed sheep clustered against the other side of a stone wall. They baa-ed and thrust their heads into the air. Steam gathered into a darkening cloud over them.

“You’ll start your own blizzard, if you don’t watch out,” he warned them.

For a moment the sheep held their breaths, puzzling out a response, and the cloud dispersed in the wind. But, coming up with nothing, the animals exhaled, blowing up another cloud of steam.

Flatiron shook his head and trudged on. He felt a chill claw of wind scrape down his back, leaving a wake of shivers. “Not far now. Just one foot in front of the other, and trek’ll soon be over.” The shivers spread to his shoulders, ran down his arms, and curled his fingers into his palms.

A thud startled him. He turned in time to see a second lump of snow slip from a branch in the copse, landing with a solid plop. Where the snow had been now sat a raven, a silhouette of coal against the gray sky. Aiming a squawk at Flatiron, the bird flapped its wings before settling back on the branch. As if by signal, another raven joined it, and then three more.

“Going to Inver, is he?” remarked one of them. “Feeling the cold, too, my word,” came from another. The others piped in. “Shivery weather, ain’t it?” “Don’t let that cloud knock off your hat!” “Watch us. We’re off.” With a noisy rush of wings, the five took flight towards the village. A black feather, streaked with grey and smaller than his thumb, landed on Flatiron’s sleeve. In the sky, the birds shrank to black dots and then dropped out of sight behind the Hill.

“An unkindness of ravens,” Flatiron recited. “A muster of storks. A siege of herons. A cast of hawks. A deceit of lapwings.” He pocketed the feather, his eyes on the rise just ahead. For eighty-two years, he had hiked to the top of the Hill, surveyed the village on the other side, and then decided whether to turn back or keep going. He stopped there now.

Smoke rose from chimneys, anchoring Invermere to the lowering clouds. Ravens swarmed like schools of fish. A red cloth, not yet rigid, flapped on a line. On the Hill’s crest, the wind, scented with animal dung and frozen hay, struggled against him, but Flatiron pushed forward. After a few steps, the wind gave up, and the village rose to engulf him. He gulped one final icy breath before sinking among the houses, where sooty smoke had streaked the walls. Down here, the air tasted of burning peat.

In the shop, where he leaned his snowshoes in a corner, his breath steamed in front of him. He waited quietly while Mrs. Foresight helped a young mother, whose tyke clung to her skirt while staring at Flatiron’s knees. He examined them himself and noted a tiny hole starting in the left knee of his britches. A scar from the morning’s efforts with the firewood.

Mrs. Foresight stared at Flatiron’s chin. “Best to come early and be tucked back in at home ‘fore lunch, cold day like this, innit?”

Flatiron nodded, opened his mouth to speak, but too slowly. The woman had already started up again.

“Your package ain’t come yet, but I expect it next week, just like I told you last time already. Tuesday, after floods clear.” She ducked her head to glance sideways out a window. “Looks bad now, but melt’ll start in two days.” She glanced back at his chin. “You’ll be wanting some bread crumbs. And an onion.”

Whatever for? wondered Flatiron. Yet he paid for the items. Wrapped in yellowed paper and tucked into his deep pocket, they banged against his leg as he left Invermere.

With the wind at his back, the climb out of Invermere was easier, and all his layers warmed him. Densely falling flakes hid Bearded Tor; behind the wall, the sheep wriggled out of snow banks and then huddled more closely together. In the copse, a host of sparrows flitted among the branches, threatening the sleepy owls. A single crow stood sentry on a limb overhanging Flatiron’s path.

From his pocket, he dug out the onion … the packet of crumbs … the feather–which had stretched to the length of his forearm and turned completely grey. Whose feather now? A stork? An ostrich?

Under the sentry’s branch, he proffered the feather. The crow gripped it with a claw and flew off, hoarsely calling, “About time. They’ve been waiting for ages!”

Flatiron scattered the crumbs over the copse and watched the sparrows dip up the meal, bowing and scraping in an avian gavotte. The owls rearranged their feathers.

He stood so long that he began to feel the wind creeping under his cap and scarf and cloak. Snow had buried his snowshoes, and he had to shake them off before starting the last stage of his walk.

“Yes, yes, you’re quite right. This is no weather to be standing around in.” He gently shut the gate, making sure the latch was tight against the wind. Even before opening his door, he could smell dinner.

While Flatiron’s woolen layers steamed near the hearth, he drank the mug of black coffee that had been made ready for him. Stew bubbled in a heavy pot suspended over the fire.

“The feather. You planned that, didn’t you?” he said. He took another sip. “Am I too late to add the onion?”