Proust, sort of, a compendium of posts

Interspersed with my summaries of and reactions to Proust’s novels are a few posts on related topics, highlights of which I’ve excerpted and combined below. It amazed me at the time how Proust-related books and articles would fall into my lap. Coincidence? Serendipity? Whatever the case, it’s all very interesting.

Edmund de Waal’s The Hare with Amber Eyes, reviewed in the NYRB (Oct. 14, 2010) reveals a possible connection to Proust, for de Waal’s great-grandfather’s cousin, Charles Ephrussi, could have been an inspiration for Swann.

de Waal is a potter/artist (beautiful work; photos of his installations are available on his website; he’s also recently published a new book, The White Road, a history of porcelain) who inherited a huge collection of netsuke from a great uncle. This inheritance sent him on a journey through Europe and Asia, tracing the netsuke through generations of family members who had owned them. It’s a book about outsiders (Jews, artists, collectors, homosexuals) that perfectly matches Proust’s work.

In the first few chapters of de Waal’s book we find where the real Charles Ephrussi overlaps with the fictional Charles Swann. Ephrussi develops an all-consuming interest in Dürer, Swann in Vermeer. Ephrussi hangs out in Mme Lemaire’s salon, Swann in Mme Verdurin’s. Ephrussi’s religion separates him from polite society, whereas for Swann it’s his marriage.

Here [he] stands at the open window of their family apartment looking out onto the intersection of the rue de Monceau’s neighbouring streets. He stands with his hands in his pockets, well dressed and self-assured, with his life before him and a plush armchair behind him. ¶Everything is possible.

A sense of wealth exudes from this portrait, as well as from de Waal’s memoir. The Ephrussis had an astonishing amount of money, with family homes across Europe — a different one for each season, plus 2 or 3 more for side excursions. Those were the days, my friend!

Trolling through a French wiki brought me this bit of info about another possible model for Charles Swann (my mediocre translation from the original French):

Charles Haas, “marvelously endowed with intuition, finesse and intelligence” (Boni de Castellane), had a fortune large enough to save him from having to earn a living.  de Castellane adds, “Shy due to his Jewish heritage, he was the only one of his race (all poor) who was a friend to all women, was cherished in the salons, and was appreciated by men of good taste.  He gave to this category of the spiritually and uselessly idle that were like a luxury in the society of those days, and of whom the main value consisted of being able to gossip, before dinner, at the Club Jockey or at the Duchess of Trémoille’s home.  His lack of a job didn’t spur him to try harder; rather, his intelligence was justification enough for all his ambitions.”

Charles Haas was a regular at literary salons, especially those of the Countess Robert de Fitz-James and Mme Emile Straus, at public auction houses, the lobby of the Comédie-française, at the ateliers of painters, particularly that of Degas, whom he had met at the home of Mme Hortense Howland. 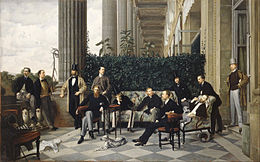 How thoughtful of the wiki to reproduce a painting by James Tissot, where Haas is depicted in the top hat at the far right. Another note of interest: Haas was one of Sarah Bernhardt’s lovers.

Note that Haas’s shyness about his Jewish blood overlapped l’affaire Dreyfus and Zola’s “J’accuse!” Heady times! (BTW, see Jacqueline Rose’s essay in the 10 June 2010 LRB for a great exploration of Zola’s continued relevance, more than 100 years later. Great writing, and dedicated to the late Tony Judt, one of my favorite public intellectuals.)

That’s enough for one set of excerpts.

in no particular order: author, teacher, cyclist, world traveler, single parent. oh, and i read. a lot.
View all posts by Lizzie Ross →
This entry was posted in 2016 Goals and tagged Edmund de Waal, Marcel Proust. Bookmark the permalink.