Puppet shows! Fun times for all, right? Not in this chilling Newbery Honor book. In 2007, Laura Amy Schlitz had won the Newbery Award for Good Masters! Sweet Ladies! Voices from a Medieval Village. This 2012 gothic fantasy by the same author takes place a few centuries later, in an England those medieval villagers could never have imagined.

And remember those towers that Chris mentioned four days ago in “Gothic Dreams”? Well, Schlitz gives her readers one that’s full of menace. Here’s her take on the Victorian gothic novel: 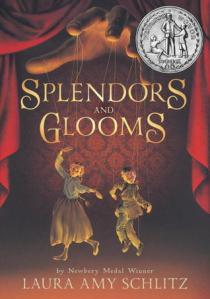 1860, London, autumn. For days, fog thick as pudding envelops the town. To cross a street is to gamble your life, since carriage drivers can’t see you before you’re a bump under their wheels. Mud, urine, manure, and offal ruin the shoes of those without a penny or two to hire a street sweeper. The noise, the stink, the bad food and water, the diseases — there’s no escaping these. Just a few years earlier, all but one of the Wintermute family’s children died of cholera.

Fifty pages into this novel, the one surviving child goes missing. 50 more pages, and we know what’s happened to her. And there’s still almost 300 pages to go!

But I’m getting ahead of myself. Schlitz’s novel starts in a nearly collapsed tower, where a witch is dying, albeit slowly. A former lover left her before explaining how she could free herself from the curse of the fire opal that powers her magic.

Back in London, the master puppeteer Grisini has two apprentices: the orphans Lizzie Rose and Parsefall. Lizzie Rose (nearly 15 years old) plays instruments and sews the puppets’ costumes; Parsefall (probably 11, but no one knows for sure) assists Grisini during the puppet shows. Both children are starving and maltreated. Parsefall is missing a finger and can’t remember how he lost it. Lizzie Rose has not yet learned to fear Grisini, but she doesn’t trust him. Though not brother and sister, Parsefall and Lizzie Rose spar and bicker like siblings.

At one point, we learn that Parsefall is haunted by “splendors and glooms” and has “an appetite for prodigies and wonders, for a world where spangles were stars and skeletons frolicked until their bones fell apart.” Lizzie Rose, with more education than Parsefall, corrects his grammar and pronunciation, shares her food with him (he never reciprocates), and dreams of a better life for them both.

The night that Grisini’s puppets perform at Clara Wintermute’s 13th birthday party, the girl disappears. Lizzie Rose suspects Grisini, but has no proof. When Grisini himself disappears, his apprentices are left destitute, wondering if he has simply deserted them. Lizzie Rose ends up drudging for their landlady to cover their rent, and Parsefall puts on puppet shows for the few pennies he can earn.

Fans of Gothic literature will find in Splendors and Glooms most of the familiar tropes: orphans, an evil wizard, a crumbling tower, a crypt, a cursed jewel, a doubtful legacy. There’s even a bit of Blackbeard’s castle, in a locked door the children are warned not to open. Of course they ignore the warning.

Readers will also find diabolical magic, two mages whose hatred for each other draws the children into a trap, and the cleverest use of puppets in any story I’ve ever read, including M. R. James’ “The Story of a Disappearance and an Appearance” (1913), which features a too-lifelike Punch and Judy show in 1830s England. In a YouTube video advertising the Puppet Theatre Barge located in Little Venice, London, Stan Milton calls puppetry “ethereal magic”. That’s what Schlitz gives us in the few performances that occur in her novel. Audiences are enthralled — even hypnotized — by the dancing puppets, which include skeletons that slowly lose their limbs until there’s nothing left but skulls, their toothy jaws still chomping at phantom meals.

Part One of Splendors and Glooms takes place in London, Part Two near Lake Windermere. How Schlitz gets everyone up there is such a clever piece of plotting that you hardly see it happening. In this neo-gothic novel, she is the genius puppeteer, pulling the strings that place every character where they need to be, at just the right moments. So satisfying!