#WitchWeek2020 Day 2: A Gothic Reading of The Betrothed

Today’s guest blogger, e-Tinkerbell, lives in Italy, so it’s no surprise that she brings this classic Italian novel from the 19th century to our attention. e-Tinkerbell is a high school English teacher who loves literature, history… and shoes. She blogs at e-Tinkerbell. All translations from the Italian are hers. Buona lettura!

The Betrothed (I Promessi Sposi*) is well known as an iconic love story, like Romeo and Juliet, but it is actually much more than this. We are talking about the greatest Italian novel of modern times and its author, Alessandro Manzoni, is considered the main Italian novelist of the 19thcentury and leader of the nation’s romantic movement. “With the exception of Dante’s Comedy, no other book has been the object of more intense scrutiny or more intense scholarship” writes the Italian scholar Sergio Pacifici. The Betrothed, in fact, still forms an indispensable part of the curriculum in Italian high schools and it helped to establish and formalize the modern Italian language.

Begun in 1821 and published in three volumes in 1827, The Betrothed was an immediate success and introduced a new genre: the historical novel. When the novel landed in America in 1834, the book had already become a hit in Europe. With more than 80 reprints, The Betrothed had caught not only the attention of publishers but also the praises of many illustrious writers of the time such as Mary Shelley, Walter Scott, Charles Dickens, George Eliot, who had the fortune to know Italian and appreciate the book in the original language. The problem of the language employed by Manzoni was no minor matter, as translators found it very difficult to interpret it (as Italian students do today), and this was one of the reasons why in England, for example, The Betrothed received cold reviews at first. Edgar Allan Poe, who himself ventured into a translation of the novel, hailed it in the Southern Literary Messenger in 1835 as “a work which promises to be the commencement of a new style in novel-writing.”

The tale is set in Lombardy in 1628 during the oppressive Spanish occupation and the Thirty Years’ War (1618-1648). The betrothed of Manzoni’s title are Lorenzo Tramaglino (known as Renzo) and Lucia Mondella, two young peasants who share an unfading love in their desperate attempts to marry against all odds. Renzo and Lucia, who live near Milan, plan to be wed by the local priest, Don Abbondio, but two thugs of the local baron, the villainous Don Rodrigo, who himself desires Lucia, threaten Don Abbondio and impart him this order: “Questo matrimonio non s’ha da fare”(“This wedding is not to be celebrated”), so the clergyman, who is not actually a lionhearted sort of man, tells the lovers that there will be no ceremony for them that day.

What follows is a journey made of perilous situations the two lovers have to tackle: wars, famine, bread riots, and last but not least the plague. In this journey we will meet a gallery of memorable characters, such as the Nun of Monza, a feared criminal known as the Unnamed, and the virtuous Cardinal Federigo Borromeo.  Differently from Romeo and Juliet, good wins over evil and the couple reach their deserved happy end at last.

The Betrothed fully belongs to the Gothic trend so en vogue at the time more than it seems at first glance. Gaspare Manzoni, son of Alessandro, reveals in his diaries that his father had long wished to write a Gothic novel in his youth. Although he never completed the project, it is possible to trace in his masterpiece both the structure of the Gothic novel and themes, characters, and settings so dear to noir fiction.

Let’s start with the structure. Almost all Gothic novels have a circular structure. A girl begins to be persecuted by a force that represents evil or perdition that endangers her virginity and her own life. Thus the persecution begins, followed by the existential descent of the girl, the escape until she reaches the moment of maximum perdition (the hypogeum) which usually coincides with a kidnapping, a captivity (in castles or convents) and a close proximity to ghostly and diabolical characters. The moment when everything seems to be lost, the ascent begins slowly for the protagonist, sometimes thanks to the providential intervention of positive characters, or because of the feelings of guilt that overwhelm the villain. At the end of the nightmare, the situation of initial serenity, prior to the eruption of evil, is restored.

This circularity recurs perfectly in The Betrothed: Lucia cannot marry because she is bothered by Don Rodrigo, she is then forced to escape and split from her partner Renzo, she will end up in the corrupt convent of Gertrude, only to find herself prisoner in the castle of the Unnamed. Having touched the hypogeum, Lucia begins her ascent: the Unnamed is corroded by a sense of guilt and repents, then Cardinal Borromeo (the ‘Good’) intervenes to protect her. Finally the plague arrives to purify all from evil. The symbolic value of the name of the defenseless heroine must be taken into account. Lucia means bearer of light, of good; it is thus a symbol of the same divine strength. Mondella, the surname, etymologically recalls the idea of ​​purification (mondare = clean), of cleansing from sin and evil.

Therefore, the characters of The Betrothed clearly follow the Gothic narrative pattern: Lucia immediately qualifies herself as the persecuted, the heroine on the run, chaste, innocent, while Don Rodrigo is the persecutor. He represents evil. Always surrounded by assassins (Il Griso, il Nibbio), he exercises his power to satisfy his desires.

Gertrude is a mysterious woman who has been forced to become a nun. As a consequence of the strict and repressive upbringing she had received, she develops a certain murky attraction for evil. She gets involved in the illicit love for Egidio and will be his accomplice in the murder of a nun and in the kidnapping of Lucia.

Egidio, an unscrupulous man and friend of the Unnamed, represents the evil one, the tempting devil, bearer of violence, death and perdition. The Unnamed, the “Lord of Evil”, hidden in his castle and tormented by his ferocious nature and the sense of guilt for the crimes committed, anticipates Count Dracula.

The environments and the themes of The Betrothed are definitely Gothic. The setting is substantially medieval or associated with a dark, distant era, intimately intertwined and connected with the religious repression of the period (the beginning of the 17th century). The antagonistic relationship that this literary typology establishes with the Catholic religion is symptomatic of all this: monasteries, deconsecrated churches, and cemeteries return obsessively. Not surprisingly, we find monks possessed by the devil or girls forced into nunneries.

The characters who move in the Gothic context are distinguished by lacerating internal conflicts and are often depicted as ambiguous, mysterious, prey to violent passions or tormented by destructive pains of love. The convent corrupted by evil and dominated by Gertrude and Egidio and the terrible castle of the Unnamed are described with the typical Gothic sensibility. Even from the chromatic point of view, Manzoni does not shy away from representing them in this angle. Particularly interesting is the usage of black and white that often accompanies Gertrude (especially in her first dialogue with Lucia) to synthesize her inner conflict and the murky burden of evil. 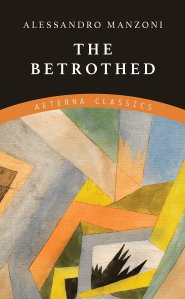 An inexplicably abstract cover for the Kindle edition

The theme of rape runs throughout the work—almost always implicitly, if not downright symbolic. The description of Don Rodrigo’s thugs who force gates and doors in an attempt to kidnap Lucia is a sheer example of this tension of violating something sacred and intimate by force. The persecuted virgin is, in fact, one of the fundamental figures of the Gothic novel and we can find it in Richardson’s Clarissa, Walpole’s Castle of Otranto, and even more in Radcliffe’s and Lewis’s works.

The catharsis is represented by the plague that comes to definitively put an end to the story, to give a spiritual perspective to history, strongly imbued with moral tensions and aimed at educating and improving both the individual and the community. In classic Gothic novels, catharsis (a fire, an epidemic, the collapse of the castle, etc.) often occurs mechanically, without all the implications that Manzoni’s pen can give back, and we are not far from the truth if we assume that the description of the plague in Milan in 1628, and the details of the “uncoffined bodies naked for the most part, some badly wrapped in dirty rags, heaped up and folded together like a knot of serpents,” and the “Monalti,“ the men who, “having had the plague, were considered exempt from future danger, and were employed to bury the dead”, might have strongly inspired Edgar Allan Poe in his “Mask of the Red Death” and “King Pest”. Manzoni couldn’t have a better Gothic connoisseur as an admirer, for sure.

Modern Italian graphic novel edition. Bet you can identify all these characters now.

*Anyone familiar with E M Forster’s A Room with a View will remember Cecil Vyse using this phrase to announce to Lucy Honeychurch’s mother and brother that she has agreed to marry him. Which tells you everything you need to know about Cecil.

in no particular order: author, teacher, cyclist, world traveler, single parent. oh, and i read. a lot.
View all posts by Lizzie Ross →
This entry was posted in Classic, Gothic, Romance, Witch Week and tagged Alessandro Manzoni. Bookmark the permalink.

9 Responses to #WitchWeek2020 Day 2: A Gothic Reading of The Betrothed