Another post in my continuing salute to Herman Melville, on the occasion of his 200th birthday. 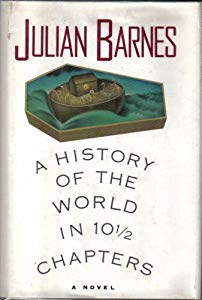 For today, I’ve selected an unlikely book, Julian Barnes’ 1989 novel, The History of the World in 10½ Chapters (Borzoi/Knopf). This was the book that shot Barnes to the top of my favorite authors list for some years, and for a while I even had a reader’s crush on him, thanks to the parenthetical half-chapter between Chs 8 and 9. More on this later. For now:

I’m a bit stunned I haven’t reviewed this novel already, as it’s a favorite of mine. Not actually a novel, with identifiable protagonist/antagonist following some kind of arc through the 300+ pages, nor an actual history in any recognizable way, History of the World is instead an exploration of humankind’s unfailing and never-ending ability to get ourselves into big trouble via an almost admirable desire to figure out what the heck this is for. “This”, of course, being our lives.

Barnes starts with retelling the story of Noah’s ark, but from the point of view of an insect stowaway who holds nothing back as it dishes gossip about Noah and his family. It isn’t a pretty tale, full of rainbows and doves and kindly Noah shepherding matched pairs of animals to safety. Nope. These people, according to the woodworm, are pretty despicable. For instance, any animal not meeting Noah’s criteria for “acceptable” got tossed overboard. His jealousy cost us the unicorn, and he keel-hauled the ass for trying to mate with a mare. (By the way, the offspring of this mating is a mule, so we’re lucky Noah didn’t kill the ass outright.) Noah took not just 2, but 7 of many animals, and it soon becomes clear that this is because the humans will need something to eat. Noah’s ark is essentially a “floating cafeteria.”

Saved from the flood, but intended for the fire. This would make a fitting epitaph for humanity, and subsequent chapters show that it could be justly deserved: A cruise boat’s lecturer finds himself in a quandary when hijackers come aboard and threaten to start killing passengers. A medieval religious court tries and excommunicates the beetle species responsible for rendering a bishop insensate by eating through the leg of a throne that collapsed when he sat on it. A woman and a pregnant cat survive nuclear holocaust (or perhaps this was just a fever dream). Two separate parties climb Mt. Ararat, looking for the remains of Noah and/or his ark. Director, actors and crew attempt to film a dangerous river rafting scene in a South American jungle. The Titanic. Jonah and the whale. Jewish refugees who, in 1939, float around the Caribbean in search of a country that will take them. 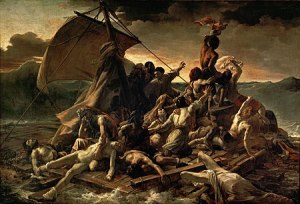 One chapter first tells the story of the 1816 wreck of the French ship, the Medusa, and then provides the story behind Géricault’s painting inspired by that wreck. History and then art history/criticism. Barnes’ publisher (no doubt, at his request) includes a full-color fold-out insert of the painting, so that we can look at it as we read Barnes’ analysis.

We quickly figure out that the narrator, most likely an Englishman, has landed in heaven, where he can eat the perfect breakfast for every meal, have sex with as many people as he likes in whatever way he wishes, play rounds of golf until he manages to score a perfect 18, meet famous people, and go shopping (no limit to cost or items available! you want it, we have it!). After a few hundred years (perhaps 950, the length of Noah’s life), he gets bored and asks to move on (we learn that only readers who like to argue about books at bookclub-like meetings can last several millennia in this heaven). Everyone goes to heaven (even Hitler, in his silly uniform, makes an appearance), everyone gets tired of it. Grim or comforting? I can’t decide.

And finally, that parenthesis. That half-chapter, which is about love, and which made me fall in love with Julian Barnes for about 3 weeks (don’t worry, this was 30 years ago, and I’ve been over him for a looooong time). He — or should I say “Julian Barnes” — is lying in bed next to his wife, middle of the night, and thinking about love. What is it? Why do we want it, especially since it’s guaranteed to cause us unhappiness, even if it turns out well.

He also considers “history”, that troublesome word in his title. “History isn’t what happened. History is just what historians tell us…. One good story leads to another.” And then a few lines later:

The history of the world? Just voices echoing in the dark; images that burn for a few centuries and then fade; stories, old stories that sometimes seem to overlap; strange links, impertinent connections.

And just one more long quote about love vs history:

Love won’t change the history of the world…, but it will do something much more important: teach us to stand up to history, to ignore its chin-out strut. I don’t accept your terms, love says; sorry, you don’t impress, and by the way what a silly uniform you’re wearing.

This could be one of the rare occasions where a parenthetical statement is perhaps the most important point of the larger work.

in no particular order: author, teacher, cyclist, world traveler, single parent. oh, and i read. a lot.
View all posts by Lizzie Ross →
This entry was posted in Adventure, Am reading, Science fiction, Seafaring and tagged Julian Barnes. Bookmark the permalink.

2 Responses to Everything is connected