It’s time for another progress report on my reading-the-sea project. For this post, I had planned to include notes on Melville’s Billy Budd, but I’ve been busy having fun instead — fun reading other books, that is, so BB will have to wait a bit.

Along with a quite enjoyable revisit to the Norfolk Broads and Lake District via Arthur Ransome’s Swallows and Amazons series, I’ve been in several of the world’s oceans, guided by authors exploring the true stories behind two important adventure tales.

Robert Kraske’s Marooned: the Strange but True Adventures of Alexander Selkirk, the Real Robinson Crusoe (Clarion Books, 2005, illustrated by Robert Andrew Parker) holds few surprises and is a bit skimpy on detail,* but for a quick read it does the trick. What’s most interesting, and sadly ironic, is Selkirk’s life after his rescue in 1709. He enjoyed London for a while, but eventually grew bored with it, moved back to his family in Scotland, and then, briefly, into a cave — trying to recreate the comfortable solitude he’d found on Juan Fernández Island, where he’d become a quiet, peaceful, satisfied man.

If Selkirk, inspiration for William Cowper’s line, “I am monarch of all I survey”, had been offered the chance to return to sole possession of his island paradise, would he have accepted? In 1721, while serving in the British Navy, he died of yellow fever off the coast of Africa and was buried at sea. That, at least, was a fitting end. 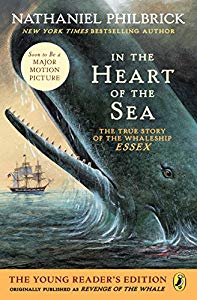 Another true story that inspired a great novel was the fate of the whaleship Essex, which was stove in by a whale in 1821. In the Heart of the Sea (Young Readers Edition, (2002/2015, originally titled Revenge of the Whale), is Nathaniel Philbrick’s shorter version of In the Heart of the Sea: The Tragedy of the Whaleship Essex. Philbrick, historian, author and sailor, takes us into the bloody and dangerous world of whaling. Unlike Kraske, Philbrick isn’t parsimonious with details. Even though this version for teens has been adapted and abbreviated, there is still plenty of gore, including the truly gruesome weeks in an open boat, when the few survivors began eyeing each other hungrily. (True confession: I had to skip a couple of pages here and there.) Not many survived, and at least one survivor spent a few years in an institution.

And then, when I saw this next book, I couldn’t resist: Why Read Moby-Dick? (2011), also by Nathaniel Philbrick. This was another fast read, with 28 brief chapters on Nantucket, whaling, ships, Melville’s influences (especially Hawthorne), characters, madness, religion, dictators’ tricks, and so on. But of the three books reviewed here, this was the most interesting and nearly convinced me that I need to include Moby-Dick in this reading project.

Philbrick’s point is that, like all works of art that survive the years, Moby-Dick has something to say to everyone, in every era. Most likely this is because we’re still essentially unchanged as humans, despite 5000 years of progress, and books become classics because they reveal the hidden corners of our selves.

I’ll include just three quotes to show what Philbrick does here. First, don’t get bogged down in what the white whale symbolizes. Move back and take a broader view. Moby-Dick is

… a novel about a whaling voyage to the Pacific that is also about America racing hell-bent toward the Civil War and so much more. Contained in the pages of Moby-Dick is nothing less than the genetic code of America: all the promises, problems, conflicts, and ideals that contributed to the outbreak of a revolution in 1775 as well as a civil war in 1861 and continue to drive this country’s ever-contentious march into the future.

Then look at the ship. According to Philbrick, the Pequod “is the mythic incarnation of America: a country blessed by God and by free enterprise that nonetheless embraces the barbarity it supposedly supplanted.” That’s the paradox of America in a nutshell — a society of “free men” throwing off the shackles of tyranny, then in a greedy rush trampling expendable men, women, and children throughout the following centuries.

And my final point, because I want to keep this brief, Philbrick reminds us of the difference between civilization and barbarity. In Chapter 64 of Moby-Dick, Fleece (ship’s cook) lectures the sharks that, while tearing at the dead whale along the ship’s side, are disturbing Stubb’s supper: “You is sharks, sartin; but if you gobern de shark in you, why den you be angel; for all angel is not’ing more dan de shark well goberned.”

We’re all barbarians, but some of us are just more self-governed than others.

*If you’re looking for marooned-on-an-island drama, you can’t do better than Scott O’Dell’s Island of the Blue Dolphins, based on the true story of a 19th century Native American girl left behind on an island off the coast of California.

24 Responses to A well-governed shark

Holding the Planet to Reason, not Ransom

Finding magic in literature and life