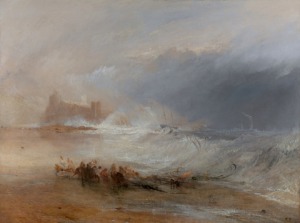 I must go down to the seas again, to the lonely sea and the sky,
And all I ask is a tall ship and a star to steer her by;
And the wheel’s kick and the wind’s song and the white sail’s shaking,
And a grey mist on the sea’s face, and a grey dawn breaking.

I must go down to the seas again, for the call of the running tide
Is a wild call and a clear call that may not be denied;
And all I ask is a windy day with the white clouds flying,
And the flung spray and the blown spume, and the sea-gulls crying.

I must go down to the seas again, to the vagrant gypsy life,
To the gull’s way and the whale’s way where the wind’s like a whetted knife;
And all I ask is a merry yarn from a laughing fellow-rover,
And quiet sleep and a sweet dream when the long trick’s over.

But then so also does this quote from The Wind in the Willows: “Believe me, my young friend, there is nothing — absolutely nothing — half so much worth doing as simply messing about in boats.”

I’m not a sailor — too prone to mal de mer — but I like the idea of heading out for an adventure on the sea, and thus my theme for this year’s reading list (coinciding, as I wrote previously, with Melville’s 200th anniversary). Since that post, I’ve added to my list: Kenneth Grahame’s classic paean to life on the water, plus an obscure novel called Ahab’s Wife (had to get Moby Dick into this somehow), plus To Say Nothing of the Dog, Connie Willis’s time-traveling tip-of-the-hat to Jerome K Jerome’s wonderful Three Men in a Boat. To say nothing of Swallows and Amazons (forever!).

in no particular order: author, teacher, cyclist, world traveler, single parent. oh, and i read. a lot.
View all posts by Lizzie Ross →
This entry was posted in Adventure, Am reading, Classic, Fiction, Seafaring. Bookmark the permalink.