Another review to add to Paula Bardell-Hedley’s Wales Readathon. Chatwin’s novel of 20th century life in the Black Hills of Wales wasn’t in my TBR pile for this month, but it called to me from the pages of Anthony Bailey’s travelog, and I couldn’t resist.

Twin brothers Benjamin and Lewis Jones, born in 1900, are the main characters in this novel, but Wales also has a starring role.

In other words, this book isn’t just about Benjamin and Lewis, it’s about their world, including the land and all the oddball characters who enter, leave, and often re-enter many years later.

Let’s start with the land. The twin’s parents settle on a farm on the border between Radnorshire and Herefordshire. From the crest of the nearby Black Hill, you can look westward over Wales, or eastward over England, and despite centuries of living on this border (or perhaps precisely because of it), there is heavy distrust of “the English” in the local community. Victoria is still Queen of England when Benjamin and Lewis are born; when they turn 80, two world wars have barely touched the land around them, yet Radnorshire itself has been subsumed into the British county of Powys (“the English” at it again). The political dance doesn’t register in the lives of the Jones twins. As farmers, they see only the yearly cycles — “foddering” the livestock; mucking out sties, coops and barns; planting and harvesting, shearing and lambing — the daily toil that keeps them tied to the land, yet they never want to sever those ties. 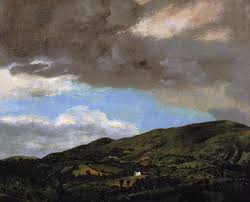 Winters are cold and dark, driving some to a form of madness. Benjamin’s and Lewis’s father suffers an extreme form of what we now call seasonal affective disorder, becoming surly and violent, resentful of hardships, neighbors, and even his own wife’s education. Then spring changes everything:

a breeze was ruffling the net curtains; a thrush sang in the pear-tree; pigeons were burbling on the roof, and patches of white light wandered over the bed-cover.

Summer and autumn show their colors, sounds, and scents as well, and anyone considering the life of a farmer might want to read this. No one should be surprised to learn how hard that life is, but the rewards come in unexpected ways. For Benjamin, it’s the joy of helping a ewe during lambing. For Lewis its working the land — at first with horse and plow and then later with tractor and combine.

If you’ve ever tried to follow sheep trails when hiking in any part of England, you’ve seen how they branch, veer off, rejoin, run parallel, stop suddenly, clamber down steep hills, and meander so much that you wonder why more sheep aren’t lost. Chatwin’s stories of all the people around the twins are like those sheep trails. Meg the Rock’s mother is murdered, and Meg’s placed on a neighboring farm. We see her at moments over the years — seriously ill, tending wild animals, befriending a lapsed Buddhist, attending a harvest festival. One member of a wealthy family appears at just the right moments to help Mary Jones or her sons. The twins’ sister Rebecca marries an Irishman and moves to North America; several decades later her daughter appears with hopes of inheriting the family farm. The twin’s father feuds with a neighbor, Tom Watkins, and Watkins, many years later, gets revenge at an auction, even though he has long been gone and the father long been dead.

The southern part of the Grwyne Fechan valley in the Black Mountains, Wikipedia

The book always comes back, however, to Benjamin and Lewis. As children, if one is hurt, the other suffers the pain. As adults, they fall ill if separated. The two grow to be different without growing apart. As adults, Lewis wants to modernize, but Benjamin hates spending the money on equipment. He’d rather buy land, even though they haven’t the manpower to take care of it. Lewis is outgoing, Benjamin shy and reluctant to leave the farm. The brothers’ only true rifts are over women (Lewis wants a wife, but Benjamin can’t tolerate the idea and sabotages all Lewis’s attempts).

Chatwin’s writing is lovely, full of pinpoint descriptive notes: “The farmhouse at Lower Brechfa lay in a very windy position and the pine-trees around it slanted sideways.” “… a hollow hidden among rowans and birches, where water whispered over a rock and there was a bank of grass cropped close by sheep.” “The beast-house had not been cleared for years; the layers of dung had risen four feet above the floor, and the heifers scraped their backs on the roofbeams.”

There’s no real plot here — no quest to complete or mystery to solve. But because of this, it’s more like real life. This means there’s also no “happy ending”, but there are endings, some of which make you think, “Ok, there is balance in the universe.”

A quick look on the internet has revealed that Chatwin’s novel was adapted for film in 1987, with Welsh actors playing the major roles, and exterior scenes filmed in Wales, including several in the small town of Crickhowell. The search now begins for a copy of that film. [UPDATE: 2 minutes later: yep, it’s on Youtube]

NB: This is a reposting of my review from 8 September 2013, updated with a few new comments and corrections after a third reading of the novel.

7 Responses to In Welsh hills

Holding the Planet to Reason, not Ransom

A quest for the magic in life

Musings on Literature. Words about Music.

Reading for and With Children
Re-enchantment Of The World

I read that in a book
She Reads Novels