Packing for a lengthy trip that includes a great deal of moving on and off trains, buses, boats and trams (not to mention walking) presents a particular challenge for a reader who hopes to travel light: How many books should I bring? Will one thick book be enough to last the whole trip? Or should I instead pack several skinny books, abandoning each as I complete it? (Which begs the question: am I constitutionally able to abandon any book? My library says no, but I’m working on developing that skill.)

A week before the start of my recent 100-day trip, I had a short stack of possibles: a collection of essays, two books of poetry, two thick 19th century novels, and a favorite 20th century work that I’ve been wanting to reread*. Finally, after packing and unpacking and repacking, I settled on taking this:

Like Dickens’ later novels, The Pickwick Papers was serialized. It ambles along as the Pickwickians travel in and beyond London. The light mood changes, however, when Mr. Pickwick’s landlady misconstrues his query about inviting someone to live with him, and he finds himself the defendant in a breach of promise case. Dickens satirizes greedy lawyers, interminable legal cases, debtors’ prison, and other evils he’d seen not just as a court reporter, but because his own father had been imprisoned for unpaid debts.

Some scenes could have inspired Feydeau, with doors slamming and people stumbling in the dark into the wrong room at the inn. The Pickwickians hire horses they don’t know how to ride, get lost, get taken advantage of, get caught up in a near riot during an election, sneak around back gardens at night. After a rook-hunt that wounds more than the birds, Mr. Pickwick is offered the opportunity to watch a cricket match. “I, sir,” replied Mr. Pickwick, “am delighted to view any sports which may be safely indulged in, and in which the impotent effects of unskilful people do not endanger human life.”

In short, Pickwick is a Dickensian delight, with dozens of characters, memorable lines (“There are very few moments in a man’s existence when he experiences so much ludicrous distress, or meets with so little charitable commiseration, as when he is in pursuit of his own hat.” “No man knows how much he can spend, till he tries.”) and entire chapters that made me giggle with delight. 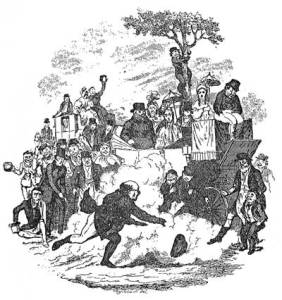 Mr. Pickwick in chase of his hat, illus. R. Seymour

I initially worried that the book wouldn’t last the entirety of my trip, which required that I limit myself to 7 or 8 pages per day. So of course if another book came my way, I set Dickens aside to read it (Storm in the Village by ‘Miss Read’, Robertson Davies’ Cornish Trilogy, Eva Ibbotson’s The Star of Kazan).

And then, of course, there were days at the end of which I had no energy to read anything. Museums, palaces, medieval churches — at times my eyes and mind were so full that I couldn’t bear the thought of deciphering words on a page.

But I was delighted by how easy it was to jump into Pickwick again after a break of a week or more. In a sense, I experienced the novel as its first readers had done: in weekly installments of several chapters. No difficulty remembering what had just happened, no confusions about who was who, no struggles to find my way through convoluted plots or language. Just happiness to be back with Pickwick, Sam Weller, and all the others. I finished the book on the flight home, and was tempted to start again.

So, if you’re looking for that one book to get you through a lengthy journey, this could be it.

8 Responses to “The chosen of All-Muggleton”