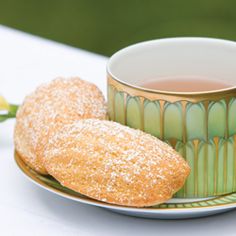 From July 2010: My first go, I was able to read only 40 pages in a week, finishing the Overture and progressing just a few pages into Combray. Proust forced me to read slowly, as I struggled to unlock the meaning of almost each sentence. I’m used to modern English sentences, short and direct, leaving the reader no doubt of who did what. Even 19th and 19th century authors like Jane Austin and Laurence Sterne take pity on a reader and relieve us with dialogue and sparkling wit. Proust, on the other hand, weaves phrases in and out, interrupts himself with parentheticals, is rarely funny, and thinks nothing of separating subject and verb with masses of words and images that made me lose track of his point. Dialogue is almost nonexistent. But if you read Proust hoping for Austen or Sterne, Dickens or Brontë, you’ll be disappointed. And so: that first post on RoTP.

And once I had recognized the taste of the crumb of madeleine soaked in her decoction of lime-flowers which my aunt used to give me (although I did not yet know and must long postpone the discovery of why this memory made me so happy) immediately the old grey house upon the street, where her room was, rose up like the scenery of a theatre to attach itself to the little pavilion, opening on to the garden, which had been built out behind it for my parents (the isolated panel which until that moment had been all that I could see); and with the house the town, from morning to night and in all weather, the Square where I was sent before luncheon, the streets along which I used to run errands, the country roads we took when it was fine.

The first section of Swann’s Way, “Overture”, is a slow meditation on those moments of confusion we have when we begin to waken after a sleep, when our minds stagger about, wondering where we are, even who we are. For Proust, these moments include a quick recall of every room in which he has slept — leading him to think of the houses in which those rooms were located, and the people who inhabited those houses. We meet the narrator’s parents and grandparents, Monsieur Swann (who seems to be unhappily married), and a couple of sweet aunts who can only obliquely thank Swann for some bottles of Asti because it would be vulgar to say anything explicit. They’re so oblique, in fact, that Swann is only confused by the comments they make.

The famous scene of the madeleine dipped in the tea (Moncrieff translates tilleul as “lime-flower tea”, but it may be better known as “linden tea”) occurs near the end of the novel’s first section, after the long meditation on beds and houses and friends and family. It’s a lovely moment, but more drawn out than I had expected. The narrator needs more than one dip to be able to make the full connection to a particular memory, but when it comes, he is taken back to his aunt’s two rooms at Combray, and the novel can begin in earnest.

But to finish the quote above, which ends the Overture:

And just as the Japanese amuse themselves by filling a porcelain bowl with water and steeping in it little crumbs of paper which until then are without character or form, but, the moment they become wet, stretch themselves and bend, take on colour and distinctive shape, become flowers or houses or people, permanent and recognisable, so in that moment all the flowers in our garden and in M. Swann’s park, and the water-lilies on the Vivonne and the good folk of the village and their little dwellings and the parish church and the whole of Combray and of its surroundings, taking their proper shapes and growing solid, sprang into being, town and gardens alike, from my cup of tea.

The perfection of that image — the “crumbs of paper” taking shape in water  — redeems all the hard work of reading Proust.

in no particular order: author, teacher, cyclist, world traveler, single parent. oh, and i read. a lot.
View all posts by Lizzie Ross →
This entry was posted in 2016 Goals and tagged Marcel Proust. Bookmark the permalink.

6 Responses to Remembrance of Proust #1