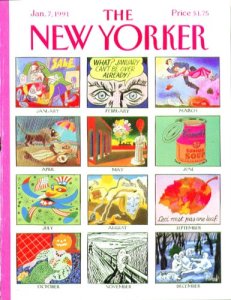 In 1991 The New Yorker ran this art calendar on the cover. Look closely and you’ll see parodies of Dali, Picasso, Munch, Warhol, Manet, and others. I especially appreciate the sentiment for the month we’ve just started: “WHAT? January can’t be over ALREADY!”

It is. And what have I done?

Let’s start with the big stuff.

The query is my latest fantasy project, sent to an agent who responded positively to some earlier work of mine. It’s a bit like sending one’s child off to the first day of school, except that I’ll have to wait a bit longer than a few hours to find out how it went. It could take as long as 3 months NOT to hear from this agent, at which point I query the next person on my list. I know it would be more efficient to double, triple, or even quadruple my queries, but if my second choice person expressed interest before my first choice had responded, I’d be in a quandary.

The new project will take my mind off of waiting to hear from the agent. Picture this: a small town in 1960s northeast Oklahoma, with a “downtown” area comprising a few stores along one street. It’s just a few miles from “out in the country” that includes a dam-formed lake. Here our hero decides he will travel no more and sets out to get his mom to settle. I don’t yet know how he does this, nor even why his mother is constantly on the move, but I trust I’ll discover these as I write.

As for the small stuff, the teaching is as per usual. For the Reading Challenge, I’m recording books finished on a separate page of this blog. One thing, though. While reading Egan’s A Visit from the Goon Squad, I came across something that made me pause. In one chapter, a character has been hired to improve the public profile of a Latin American dictator known as “the general”. The general is described as having “large dried-apricot ears.” In Carolyn Forché’s poem “The Colonel”, which I first read 30 years ago, a Latin American dictator spills a bag of ears onto a table: “They were like dried peach halves.”

Synchronicity? Coincidence? Homage? Or something more sinister? Probably not the latter, since Forché was at the ceremony announcing finalists for the 2010 National Book Critics Circle Awards, a list which included Egan’s novel. And it’s a perfect simile: ears do look like dried halves of apricots or peaches! Yet the overlap troubles me.

As a writer, I worry all the time about the extent to which other authors influence my ideas. I read because I enjoy it, but also, now, to see how other writers handle plot and character and dialog. Of course I want to be original; the “anxiety of influence” isn’t something felt only by poets.

So. I take a deep breath. I go back to my writing, attentive to echoes that warn me of getting too close to someone else’s style or plot or creation. Also, I take great solace in thinking about musical composition. There are only 8 notes in a scale (12 if you count the flats and sharps in between). Yet there seems to be an infinite universe of possible melodies. With the entire English lexicon at my disposal, I ought to be able to manage this.

Three days later: These are my best guesses about the artists parodied in the calendar, in order from January to December: Picasso, Lichtenstein, Chagall, Rousseau, de Chirico, Warhol, Miro, Dali, Magritte, Matisse, Munch, Manet. So many whose names start with M! If I’ve misidentified any of these, please let me know.

in no particular order: author, teacher, cyclist, world traveler, single parent. oh, and i read. a lot.
View all posts by Lizzie Ross →
This entry was posted in Am writing, reading. Bookmark the permalink.