How to time travel

I’m not a historian. Nor am I an expert in the Middle Ages or the history of Northern Europe. And yet: I’ve set myself a task to write a novel covering nearly 700 years of history, from the 12th to 19th centuries, and from Norway and its Atlantic outposts to York during the Plague years and London just after the Restoration, ending on an ocean beach once belonging to the King of the Western Isles. All because of an exhibit a couple of years ago at the Cloisters.

Since I’m not a historian, my research techniques don’t involve weary slogs through archives [which, I realize, would not be weary to true historians; in fact, I’ve actually enjoyed an academic paper about archeological digs in Trondheim, including detailed analyses of how combs were made, but I found this online (thank you, Google) and not in the dusty and lonely sub-basement of a library].

My purposes aren’t to get the history right, but to get it interesting (I can feel the historians’ shudders — no fear, I’ll aim for historical accuracy). The article about the combs says nothing about the shrieks of seagulls fighting over rubbish thrown off the back of a fishing boat, nor about the hike up the steep hill to the fort overlooking the harbor, nor the deep silence at night — which actually isn’t what we who live south of the 60th parallel north would call night: it’s simply three hours of twilight between bright or cloudy days. Yet that’s the kind of information a novelist needs. The best way to get that is obvious.

After 4 days of searching, success.

So to Trondheim I journeyed, to get as close as possible to the 12th century town of Nidaros. Some of what I learned:

It’s only 2 hours by plane, from London to Trondheim, across the North Sea and then up the west coast of Norway. The North Sea is notorious for its wild waves and storms, so imagine crossing it in an open boat, one sail and 30 oarsmen. I don’t envy the oarsmen. But Trondheim is well protected from the sea, on the east shore of a fjord that dog-legs southwest to northwest as it feeds into the Sea. The Nidelva (I was told that nid is a Viking expletive), the wide river that outlines two sides of the peninsula on which Nidaros was built, runs quietly down from the hills south of town. At the harbor, with gulls and terns circling overhead, boats full of orange-jacketed tourists motor up, down, and across the fjord, a modern version of the fishing boats that must have sailed daily to net cod, hake, and mackerel.

997 is the year Olaf I (not the St. Olaf) arrived, beheaded some local earls (jarls) and began talking about this new thing called Christianity. Olaf II (no relation, as far as I can tell), died a few decades later in a battle with local farmers, and soon afterwards was canonized.

From about 1100 to 1537, Benedictines living on Monkholmen (an island in the harbor) made their own beer, traded as far away as England. At night, noises from their loud parties echoed across Nidaros. The fort that stands now on the island was built in the 1600s over the ruins of the monastery, so nothing can be seen of building foundations. 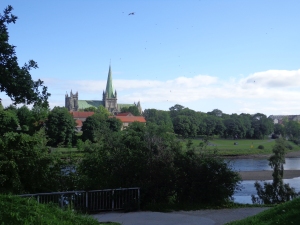 Yet while on Monkholmen, I imagined the Benedictines watching building after building rise, including the tower of the Cathedral housing the remains of St. Olaf. Even now, the spire is the highest point in the old city, making it easy to orient oneself. I could also imagine pilgrims following the Nidelva en route to the Cathedral, glimpsing that spire as they came over the last hill blocking their view, and sighing with relief to think they were close to their destination (although I have to wonder how they all got home afterwards — by foot, again?).

Almost nothing of Nidaros remains. Built almost entirely of wood (even the streets), it has died several times in fires. The narrow alleys (veita) give a hint of the close-set buildings and maze-like streets of a medieval town, but it took a visit to the NTNU Natural History Museum to understand that those ancient streets would have been crowded not just with people, but with sounds and odors: pigs, goats and poultry wander at will; a mother croons lullabies to her baby behind the room where her craftsman husband stokes a fire; a leather worker talks to himself at the window where a shutter folds down to act as workbench in his 4′ x 7′ workspace.

OK, it’s isn’t actual time travel, but it’s as close as I suspect I’ll ever get. And it’s enough.

in no particular order: author, teacher, cyclist, world traveler, single parent. oh, and i read. a lot.
View all posts by Lizzie Ross →
This entry was posted in Am writing, Historical fiction, Historical research and tagged Norway, Trondheim. Bookmark the permalink.

3 Responses to How to time travel