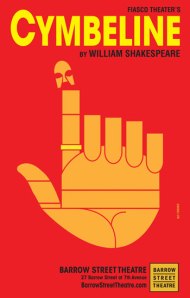 Every writer has heard the advice “Show, don’t tell.” Exposition drags at the plot, often bringing it to a standstill. True to form, Shakespeare ignores this rule. Much like the point in the murder mystery where the detective has gathered everyone to explain whodunnit, the final scene of Act V gathers all surviving characters in one location for the final resolve.

But here’s where Shakespeare’s play is different from, say, the dinner party scene in The Third Man: In the latter, Nick Charles reveals what the audience does not know, but in the final scene of Cymbeline the various characters reveal what the audience does know. In fact, only the audience knows everything revealed in this scene, for each of the characters is missing several pieces of the puzzle, and the eponymous King Cymbeline doesn’t even know the puzzle exists. The king’s passage from ignorance to understanding, then from anger to forgiveness, is the theme of this ending. King Cymbeline, who as the play begins is vengeful (exiling Posthumus and arresting Imogen), learns — inspired by Imogen — to be magnanimous.

So. Act V is all about getting everyone happily back together, including Posthumus, whom we last saw in Rome but has come to Wales as part of the Roman army. Believing Pisanio has killed Imogene, his entrance in the first scene reveals him regretting his haste. Wishing to die, he leaps into battle, fighting for Britain, however, rather than for Rome.

Via several brief scenes, we watch the battle, until Posthumus is captured. Awaiting execution (and in a scene strikingly similar to Harry Potter’s entrance into the Forbidden Forest where he expects to be killed by Lord Voldemort), Posthumus sleeps and is visited by the ghosts of his mother, father and brothers. They demand that Jupiter, the “Thunder-master”, save their only surviving family member, and the great god, as cranky as an old man disturbed from his nap, agrees to do so. Posthumus wakes to find an engraved tablet predicting a turn in his fortunes.

Except for Cloten, whose end we’ve already seen, and the ailing Queen, whom we learn has died, the characters group and regroup until eventually they all share the same stage. On learning of his wife’s demise, the King gives us no equal to Macbeth’s “Tomorrow, tomorrow and tomorrow” speech. The most he can muster is “Who worse than a physician/Would this report become? But I consider/By med’cine life may be prolonged, yet death/Will seize the doctor too. How ended she?”

She ended badly, insane and confessing all her sins. But this is soon forgotten in the rush of revealed secrets. Lovers are reunited, lost children returned to parents, exiles welcomed back, invaders forgiven. The King even agrees to pay the tribute to Rome. From their trials the characters have learned to more greatly appreciate their happiness, which may explain everyone’s eagerness to forgive all who have wronged them. Even Iachimo has a change of heart (although I have to wonder: is his eagerness to be good just another put-on?).

If I have anything else to say about this odd play, I will put up a final post on the 26th, the day of Shakespeare’s baptism. Whatever happens here, be sure to check Calmgrove’s blog for his final views of Cymbeline.

Bonus: For scenes from and insight into what looks to have been a gorgeous 2013 production of this play, watch the videos at the Oregon Shakespeare Festival’s site.

A Resource Linking Land and Community