It’s been too long

and I’ve been quite busy. I don’t know how others balance writing careers with full time jobs, because I find it impossible. I shouldn’t complain. I try not to, because I know I’m incredibly lucky. My job challenges me intellectually, and I write when the muse cooperates, with no pressures beyond those that are self-imposed.

Audience at Word Up

But about my book launch. Word Up Bookshop is a non-profit bookstore in Washington Heights. As you can see, it’s a small space, but Pam Laskin (poet, colleague and friend) and I filled it to SRO capacity. Friends, students, even a few drop-ins: all were immersed in tales of fantasy and faerie. 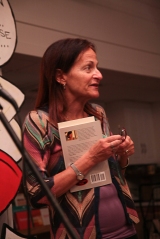 Pam read from her recent collection, Exiting the Glass Coffin, poems inspired by fairy tales. The tale of Snow White was the catalyst for the title poem, in which Pam lets Snow White rescue herself from the poisoned-apple sleep of death. Sleeping Beauty, Cinderella, Hansel and Gretel, Rapunzel, and other well-known characters have their own retellings in her collection. These are Pam’s response to the Disney princesses, those wedding-cake women who end up marrying the princes who rescue them and live happily-ever-after.

We took turns reading, and then fielded questions. Pam asked me to tell everyone about my “unusual” writing process, and I talked about NaNoWriMo (which, like winter, is coming). I’ll say more about NaNo in a separate post, but for now just know that Kenning Magic was my 2010 NaNo project, and that it looks very different now from that first draft written in a frenzy of “literary abandon”.

Another question was about how I choose my audience’s grade level, always a tricky one. Every conference I attend, someone raises that question, and the stock answer is: the age of your protagonist will decide who your audience is, because most young readers prefer a hero or heroine who is the same age as or older than they are. But it isn’t merely a matter of picking an age. The characters’ words and actions have to match their ages, and the challenges they face must be only a little bit beyond easy reach. I wrestled so often with my heroine’s age that I fear there are inconsistencies in the published version. Did I manage to keep her at 14 and her companion at 16 throughout? Or do they slip into younger behavior at various points? Are their challenges too easy?

Someone asked about how I use my various writing groups (I belong to 4), and whether I find them contradicting each other in the feedback they give. A tough question, since one writing group member was present. But here’s the easy response: all feedback is useful, especially when readers disagree. I can’t remember who said it, but disagreement among readers actually means my work is done. Otherwise, when I get feedback that points to problems, I try to remember Peter Elbow’s advice: don’t argue with the reader. Just listen, and then go home and use it as you wish.

A final comment came afterwards, from a student of mine. She said that she wanted to be a writer, but she didn’t think she could do that and be a teacher at the same time.

But you can, I told her. I’m evidence that you can do it all! If you have an idea that excites you, that makes you want to get back to it each day for long enough to crank out that first draft, and then the next one, and the next one …. It takes the kind of commitment that makes you wake up early to write your 5 pages before you head off to work. And then, on coming home and realizing those 5 pages are utterly useless, you write 5 more, because your idea is that exciting.

Which brings me back to where I started this post. I ought to know how other people balance writing with a full time job, because I’ve done it myself. I keep forgetting that. Silly me.

And now, I must get back to my current exciting idea, as I get ready for November and another writing marathon.

in no particular order: author, teacher, cyclist, world traveler, single parent. oh, and i read. a lot.
View all posts by Lizzie Ross →
This entry was posted in Am writing, Kenning Magic, NaNoWriMo. Bookmark the permalink.

6 Responses to It’s been too long