Fantasy and the Newbery 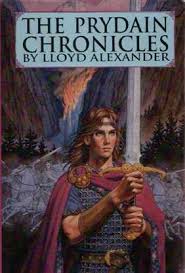 The Newbery judges seem to favor realistic and historical fiction. Even if the story is told from a doll’s viewpoint (Hitty: Her First 100 Years or Miss Hickory), the underlying plot is historical. Five fantasy authors have won: Susan Cooper (The Grey King, from her Dark Is Rising series), Robin McKinley (The Hero and the Crown), Kate DiCamillo (Tale of Despereaux), Neil Gaiman (The Graveyard Book), and Lloyd Alexander. [Madeleine L’Engle’s A Wrinkle in Time is sci-fi bordering on dystopia rather than fantasy — which means only one sci-fi book has ever won.] 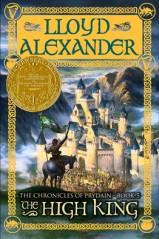 This migrated post, which I wrote in 2010, is about Lloyd Alexander’s Prydain series, the last book of which won the Newbery Award. I discovered this series as an adult (before then, my reading tended more towards science fiction), and I blame only myself for leading such a blinkered youth. Fortunately, it’s never too late to discover new genres and writers and stories that make you want to inhabit new worlds.

If you’re a young assistant pig-keeper on a poor farm, there’s not much scope for adventure, especially when the wizard who employs you won’t let you read the book of magic spells. But Taran, the asst. pig-keeper as well as the hero of this series, doesn’t have to wait long for adventure to find him. Within just a few pages, his safe home is under attack and he must set out to find aid.

Alexander puts us into a pre-modern world of wizards, oracular pigs (actually, only one), swords of mystical powers, and spells that bring the dead back to life. Those dead are so dangerous that, if you destroy one, its strength moves into the others making them even more difficult to vanquish.

The companions on Taran’s quest include the feisty daughter of a sorceress, a creature reminiscent of Tolkien’s Gollum, farmers, blacksmiths, knights, a reclusive wizard who is a cross between Merlin and St. Francis of Assisi, and a trio of seers who could be the Fates of Greek legend or the witches from Macbeth.

These books perfectly exemplify the traditional quest structure that Joseph Campbell laid out in The Hero with a Thousand Faces: Call to adventure, Refusal of the call, Supernatural aid, etc. Once you know this structure, you see it everywhere, from ancient myth to modern animation (and not just anime–even The Triplets of Belleville contains aspects of this structure; you don’t have to be young and male to be the hero on a quest).

The fifth volume, The High King, won the Newbery Award in 1969, and I agree that it’s the strongest book of the series. But Taran Wanderer is full of surprises and struck me as the most interesting. Here, Alexander moves furthest from Campbell’s predictable structure.

Alexander died just three years ago (17 May 2007). Because of his military service during WWII, he’s buried at Arlington Cemetery. There may be other fantasy writers who have received the same honor, but I don’t know who they are.

I must have been working through early ideas for Kenning Magic when I read the Prydain series, for I can see echoes of Alexander’s work in my own writing. Not that there’s anything wrong with that. I suspect artists do nothing but grab the creative cart from others and drag it a bit further down the road, jettisoning anything not needed and picking up interesting new objects as we come across them.

4 Responses to Fantasy and the Newbery

A Resource Linking Land and Community